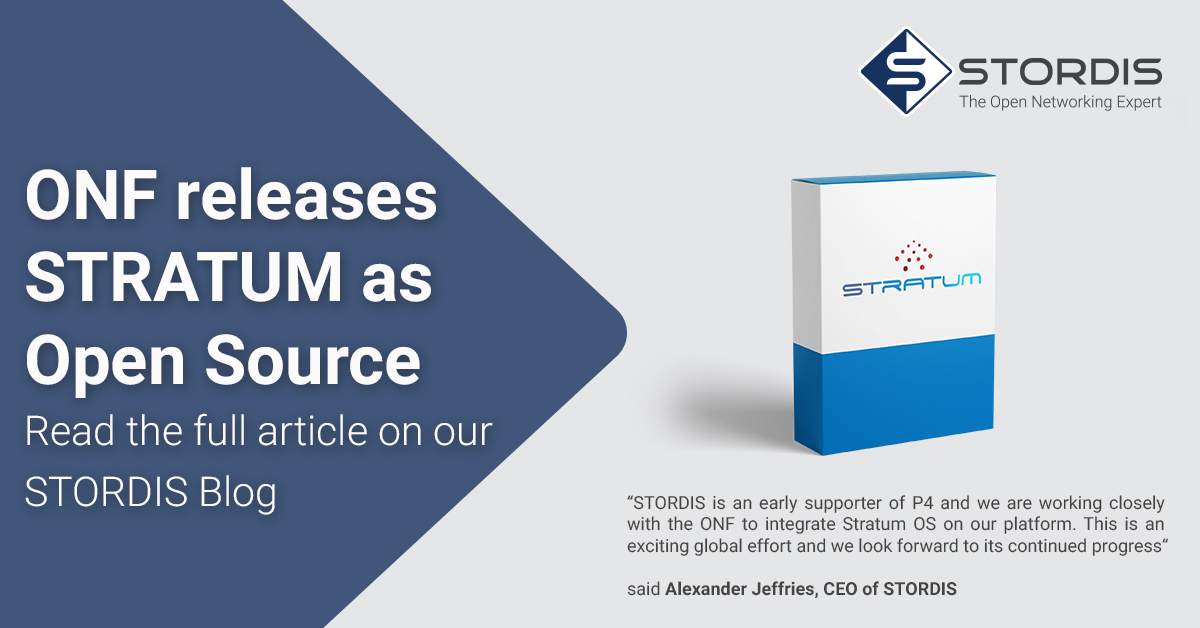 The Open Networking Foundation (ONF) has officially announced the release of the Stratum™ project under the Apache 2.0 open source license, forming the foundation for next-generation software-defined networking (SDN) work. STORDIS is an Innovator-Member of the ONF and actively participates in the project. Stratum will be made available to run on the STORDIS Advanced Programmable Switches.

Stratum is an open source switch operating system for software-defined networks and was developed in the context of the Stratum project by the Open Networking Foundation in 2018. Supporters and participators include renowned industry leaders such as Google, Tencent, Big Switch Networks, Delta, Edgecore Networks, Barefoot, Broadcom, STORDIS, Mellanox Technologies, among others. They intended to create a silicon-independent reference implementation for white box switches supporting the most possible SDN interfaces and to run on existing fixed systems, as well as on state-of-the-art programmable silicon. Stratum is a versatile platform leveraging the capabilities of other open source projects, such as P4, ONIE and ONL. It enables swift integration of devices into network infrastructures, and provides an open source solution for fully-programmable data planes.

The release of Stratum under the Apache 2.0 license promises to leverage the full potential of SDN. A rapid adoption will enable enterprise networks to deliver significant business advantage with the use of the latest switching technologies.

As ‘The Open Networking Expert’, STORDIS is proud to see that the efforts and the dedication of close business partners generate a great advancement for open networking technologies.

“Barefoot is a founding member of the Stratum project and has made significant contributions to the project enabling high-throughput, fully-programmable networks with P4, P4Runtime and our Tofino and Tofino 2 family of high-performance Ethernet switch ASICs,” said Ed Doe, Vice President in Intel’s Connectivity Group and General Manager of Barefoot.  “We are excited to see Stratum reach the important milestone of open sourcing the project’s code as this will fuel the next level of innovation in the networking industry.”

Marc LeClerc, Vice President of Marketing and Strategy for Noviflow, said: “Noviflow has been a long-time supporter of SDN and programmable silicon and in the last three years of P4. We are enthusiastic contributors to the Stratum project and see this providing us with important capabilities as we expand our product offerings.”

Stratum, the ONF and STORDIS

“STORDIS is an early supporter of P4 and we are working closely with the ONF to integrate Stratum OS on our platform. This is an exciting global effort and we look forward to its continued progress,” said Alexander Jeffries, CEO of STORDIS.

Besides being an Innovator-Member of the Open Networking Foundation (ONF), STORDIS is an active participator in various foundations and projects, including the Open Compute Project (OCP), the P4 Language Consortium, and the Open Source Business Alliance. In 2018, the German-based company contributed the BroadCtrl, an open source SDN controller project under ONOS, to the ONF.

The ONF is a non-profit consortium comprised of various leading network operators to drive the transformation of network infrastructure and carrier business models. It is an open, collaborative community and initiator of a number of projects building solutions by leveraging network disaggregation, white box economics, open source software and software-defined standards to accelerate the evolution of the industry. Currently, the organization counts 85 partner and member companies and 150 collaborating companies.

Disclaimer: All quotes were taken from the official press release ‘ONF Announces Stratum Project Now Available as Open Source; Completes Incubation Development’ published by the ONF and are property of the ONF. STORDIS is not responsible for any opinions expressed in the quotes.

Read the full press release by the ONF: https://www.opennetworking.org/news-and-events/press-releases/onf-announces-stratum-project-now-available-as-open-source-completes-incubation-development/

IBC2019 Recap – Open Networking for the Broadcasting Industry
Scroll to top
Manage Cookie Consent
This website uses cookies to improve your user experience and to optimize our website and our service to you.
Manage options Manage services Manage vendors Read more about these purposes
Preferences
{title} {title} {title}